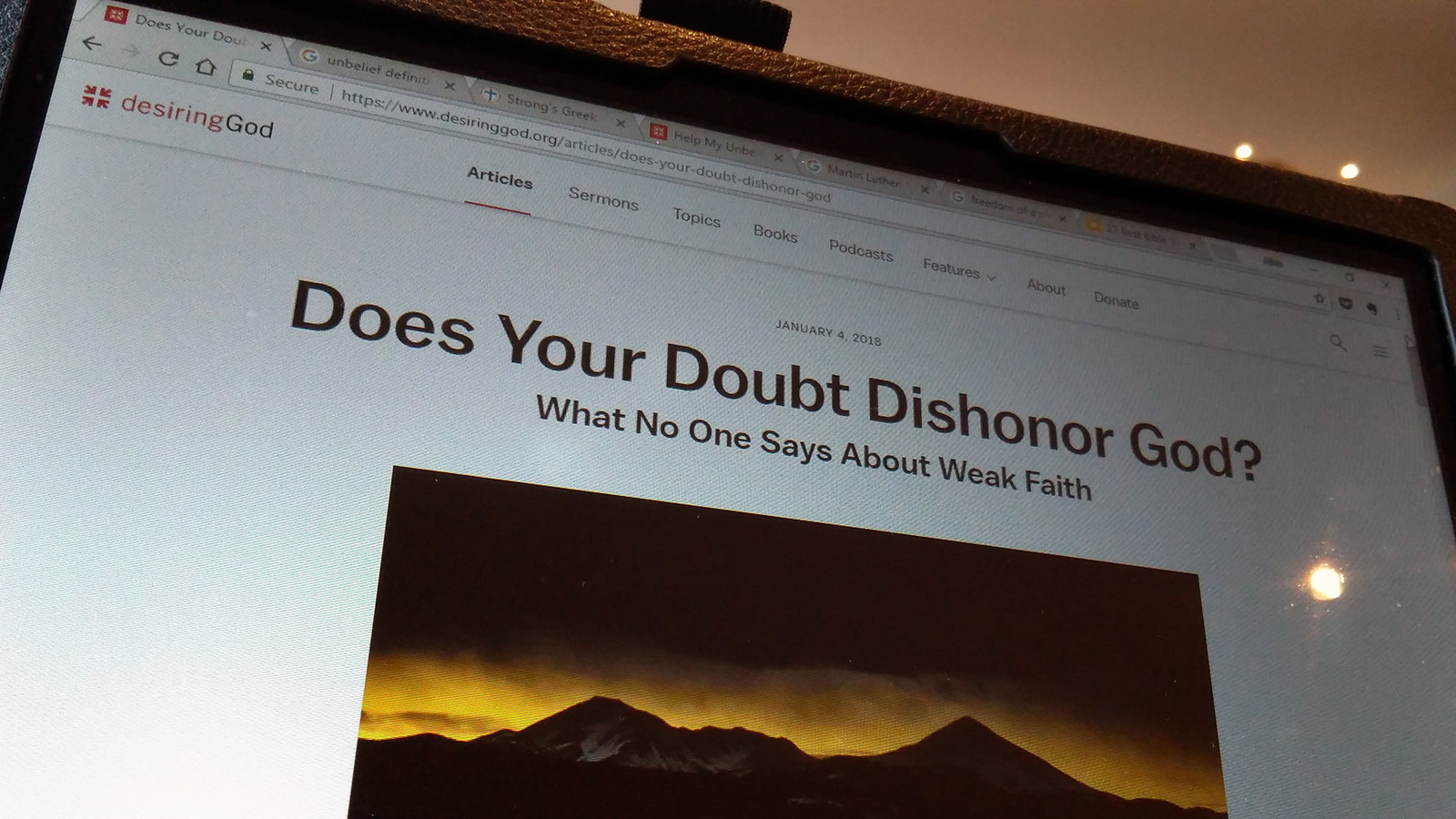 This is a brief response to a recent article on the Desiring God website that, while clearly written to challenge wrong thinking, may inadvertently have quite a detrimental impact on tender souls who are struggling under the weight of big questions about themselves and their God.

The article is Does Your Doubt Dishonor God?, written by Greg Morse, which (as the title makes pretty clear) speaks of doubt that dishonours God.

I don’t often write responses to articles on other websites. However, having dealt with first-hand the effects that a poorly chosen word can have on others (and having been guilty of it myself too many times before), I am writing this to provide some counterbalance to those wrestling with the issue of doubt who might be struggling with articles such as this. I don’t want to speak down of Greg (I don’t personally know the guy, for a start) and am not seeking to criticise him or his ministry.

In fact, to be fair to Greg, the first things he says is that he suspects he will be misunderstood and that he does not wish nor intend to speak harsh words to struggling Christians… yet ironically that may be precisely what he will end up doing.

As far as I can see the reason for this is that he uses the word ‘doubt’ instead of ‘unbelief’ and so, right from the outset, I think the article shoots itself in the foot. The title suggests this is a piece about doubt, but it isn’t. It is a piece about unbelief… and the two are very different.

Here is an attempt to draw a distinction between doubt and unbelief, in the context of trusting in Jesus for salvation from sin and eternal life:

So, let’s take everyone’s favourite reference point for doubting: Thomas. Thomas had doubts, clearly, but this was shown not to be unbelief. He doubted the words of the disciples, not Jesus person and work of resurrection to new life. We know this because, once he sees the evidence for himself, he believes. Doubt, when rightly brought to the LORD and humbly submitted to him, ultimately ends in a stronger, more robust faith. Unbelief, unless it is rightly repented of, ultimately ends in stubborn rejection of the LORD.

It is noteworthy that every illustration, example and portion of Scripture in Greg’s article actually has this distinction between doubt and unbelief, often explicitly so.

Take the section about the Exodus wanderings. As Greg himself says, ‘both Old and New Testaments depict them as stone-hearted, unbelieving, unregenerate people with whom God was not pleased in the end’ (emphasis mine).

Or take Luther’s quote that Greg uses (which, by the way, was taken from ‘On the freedom of a Christian’). While Luther uses the word ‘doubt’, he does so in the context of talking about unbelief. This is made apparent by something that Luther went on to write that was not included in the portion that Greg quoted. Luther states very clearly:

They [that is, the things we do that show contempt to God in this way] are included under the sin of unbelief and must either seek mercy or be justly condemned.
(Martin Luther, quoted from ‘Martin Luther: Selections From His Writing’, p60)

This is what is so frustrating about Greg’s article. He is clearly speaking and arguing against unrepentant unbelief and not actually about doubt at all.

One of the reasons we need to be crystal clear when talking about doubt is that unbelief can indeed involve doubting God. An atheist (in unbelief) obviously doubts God’s existence. Likewise, someone acting in unbelief can doubt God’s sovereignty or his goodness. However, the root issue is their unbelief, not doubt. Hence, a Christian who truly believes can also doubt. A believer saved from a significant life of sin and evil can doubt their salvation… but they are nonetheless still saved, and so they do not persist in their doubt but struggle and wrestle with it, maybe for the rest of their earthly life.

Most Christians who wrestle with doubt do so not out of unbelief, but out of persistent faith despite their doubts. The presence of this struggle can either fuel their doubts or actually help them overcome their doubts, as they are encouraged that the struggle is evidence of faith even in the midst of doubting.

…and this is why we need to be so careful to affirm such people and not crush them unfairly or unnecessarily with reckless words.

By using the word ‘doubt’ instead of unbelief, I suspect that Greg has significantly muddied the waters for those tender souls who are struggling with doubt but who are not guilty of unbelief. Similarly, those who need to be rebuked of idle unbelief would not feel the weight of his words probably because their unbelief prevents them from caring (and therefore reading such articles) about anything that might draw them closer to Christ.

If one reads Greg’s article and carefully replaces his wrong use of the word ‘doubt’ with ‘unbelief’ instead, then the article takes on a whole new meaning and rightly focuses on the actual issue that needs addressing, giving a helpful challenge to the idle unbelief that can corrode a person’s soul if left unchecked.

I hope that Greg considers this and makes necessary amendments to clarify his piece, so that his words might not be reckless words that pierce tender hearts like swords but would be wise words that bring healing for those stuck in idle unbelief through a helpful and timely challenge (Proverbs 12:18).